Like our "Antarctica Classic" tour, this 13-day expedition introduces you to the magic of the South Shetland Islands and the Antarctic Peninsula, but adds on two additional days to better explore its majesty. Part of the reward of arriving in Antarctica is the challenge of negotiating the Drake Passage — and the G Expedition will bring you there safely. Encounter leopard seals lazing on ice floes and immense rookeries of penguins surrounded by towering glaciers. The G Expedition’s expert guides and lecturers offer knowledge and insight that really bring the nature and history of the region to life, creating the adventure of a lifetime. 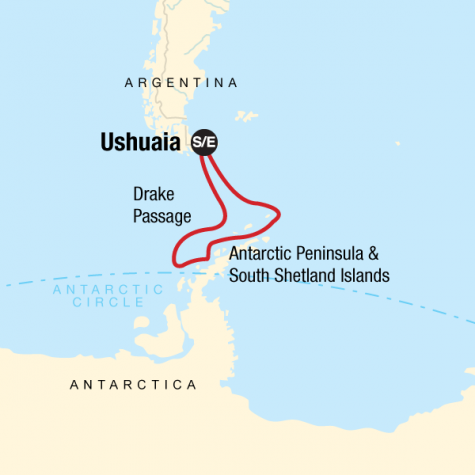 Arrive in Ushuaia at any time. Arrival transfer included. Enjoy the sights and sounds of the world's most southerly city. There will be a welcome desk in the lobby of the start hotel that will provide more specific information on the G Expedition and your upcoming adventure.

Please note that the first night in Ushuaia is on twin share basis. If you're travelling solo or have an odd number of travellers in your group and have not purchased a private cabin, you will be paired with another solo traveller of the same gender.

Enjoy a free morning in Ushuaia. Do any last minute shopping, explore the town, or visit the surrounding countryside. Embarkation on the G Expedition begins in the afternoon at the port in Ushuaia. Enjoy the evening sailing through the Beagle Channel. Expedition travel can be full of surprises! While it is our intention of adhere to the itinerary described below, there is a certain amount of flexibility built into the itinerary and on occasion it may be necessary, or desirable to make alterations. On your first day onboard, your Expedition Leader will give you an expedition overview outlining what the specific plans are for your trip. Opt to pre-book the "Tierra del Fuego National Park Visit" activity on the checkout page ahead of time to include this optional on your tour.

The G Expedition is at home in this part of the Southern Ocean, known for the unimpeded never ending fetch of the winds that encircle the Antarctic.

As the Expedition crosses the passage there will be time to become acquainted with the ship and frequent the common areas that include the lounge, dining hall, library and lecture hall where we meet our guides, ship’s crew and expedition staff.

Begin lectures and information sessions to learn the extraordinary human and natural history of the Antarctic region.
The adventure begins with an 1000km (600 mi) crossing of the passage named in honour of 16th-century English sea captain and privateer, Sir Francis Drake. The ship is at home in this part of the Southern Ocean. Take in daily lectures from the expedition team and keep an eye out for icebergs, whales, and albatross following in the G Expedition's wake.
Meals: B, L, D
Day 5-10: South Shetland Islands/Antarctic Peninsula
Navigate southwards making stops in the South Shetland Islands then through the Bransfield Strait and to the Antarctic Peninsula.

During the voyage, learn about some of the most important and dramatic expeditions to this remote corner of the world. Take an optional polar plunge, visit an abandoned whaling station or a working scientific research station, and gain a new perspective on this part of world.

Our goal is to attempt two excursions per day while we navigate through the area but our itinerary and daily schedule will be based on the local weather and ice conditions that we encounter.
With a total of six days to explore the world's most southerly ecosystem, there's more time to encounter the unique wildlife and awe-inspiring scenery of the Antarctic. Attempt two shore landings per day (weather permitting) to encounter penguin rookeries, get a good look at the variety of seal species, and keep an eye out for the whales that feed in the peninsula's cold, fertile waters.
Meals: B, L, D
Day 11-12: Drake Passage/Ushuaia

Leave Antarctica and head north across the Drake Passage. In between bird watching and whale watching and enjoying some final lectures by the expedition staff, this is a chance to relax and review the adventures of the past week before returning to Ushuaia.

Remember, the best way to experience the wildlife of the Drake Passage is to be on deck keeping a look out for Albatross, Prions and Whales!
Begin the journey north to the home port of Ushuaia. Review the highlights of the Antarctic experience with the lecturers and staff. Keep eyes peeled on the observation deck for some last-minute whale sightings.

Disembark the G Expedition after breakfast. In the morning upon completion you will disembarkation in Ushuaia. Passengers will receive a complimentary transfer to either the airport or a central location where luggage can be stored.

For those on morning flights, a transfer will bring them directly to Ushuaia airport (USH). The rest of the passengers will be transferred to the luggage storage point and given time to explore the city. These passengers should then return to retrieve their luggage and board a second transfer to Ushuaia airport in the afternoon, depending on their flight times. Please note that the transfer times are subject to change according to flight schedules.