Take the road less travelled through Central America with other travellers your own age — so you can be sure to get down with other adventurers that’ll keep up. This is one of our most exciting trips, filled with breathtaking scenery — from tropical rainforests alive with jungle melodies to colonial cities bouncing to a decidedly more human beat. You'll blaze your own path as you discover a region of volcanoes, craters, beaches, and lush forests. Sticking to budget accommodation and public transport will keep costs down and keep you rooted in local life. 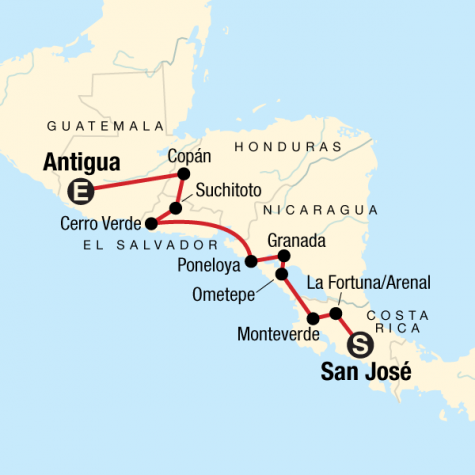 Arrive at any time. Check into our hotel and enjoy the city. Please try to arrive before 6pm for an important group meeting where you can meet the CEO (Chief Experience Officer) and the other group members.

Amid the hustle and bustle of this busy capital, San José has beautiful parks, museums and an ornate National Theatre. Enjoy the view of the surrounding lush mountains from the downtown streets, head to the central plaza, shop for souvenirs and pass the time people-watching.
Arrive at any time.

La Fortuna, the town near the Arenal Volcano, is an excellent base for adventure. Hike the area’s nature trails, swim in chilly La Fortuna waterfall, or join a canopy tour and catch a bird’s eye view of the forest greenery. Take an unforgettable night hike around the foot of the volcano, accompanied by a soundtrack of monkeys and the rumblings of the volcano.

Other optional activities include: full-day Class III & IV white water rafting on the Balsa or Toro Rivers, mountain biking, caving, horseback riding, or a tour of the Caño Negro Wildlife Refuge. Like much of Costa Rica, the area is a birders’ paradise, with over 600 species as permanent residents.

After a long day of exploring, the Baldi Hot Springs might just be the answer for your tired muscles. Soak in one of the natural thermal baths and hope the clouds part long enough for a glimpse of Arenal´s slopes.
Options abound—soak in Arenal's hot springs or get the adrenaline pumping with whitewater rafting or waterfall rappelling.

Get your adrenaline pumping and pre-book the Costa Rica Adrenaline Bundle on the checkout page to include this optional activity on your tour or ask your GCO or travel agent for assistance.
Free day to get your heart racing with rafting and other outdoor pursuits or one of many other optional activities.

Costa Rica is a natural gem because of its breathtaking flora and fauna. Travelling into the cool cloud forest of Monteverde, appreciate how lush ecosystems truly are works of art. Take time to bird watch, ride a horse, mountain bike, or zip line over the forest canopy.
Travel from La Fortuna to Monteverde by boat and van and enjoy gorgeous scenery along the way. Stop at Life Monteverde, a coffee cooperative for coffee tastings, and a tour of their farm to learn about sustainable agriculture. In the afternoon, take time to venture out and explore the mountainous town of Monteverde.

Opt to visit a cloud forest reserve, fly through the jungle canopy via zipline or tour a coffee plantation.

From the town of San Jorge, we cross Lake Nicaragua by ferry to arrive at Ometepe Island. The group will be split up amongst different families who will host you in their homes. Breakfast and dinner will be provided in the home.

Explore the island, pass plantain plantations and other small villages, to get a chance to see how rural Nicaraguans live. Enjoy a challenge? Hike Concepción Volcano. If not, check out the pre-Columbian petroglyphs, try the Tarzan swing at a nearby jungle swimming hole, or enjoy the beach.
Get to know local friends during a two-night community guesthouse stay on Ometepe Island. Test out some language skills, opt to climb a volcano, or visit the local swimming hole.

Full day on the island to spend time with your hosts and enjoy optional activities such as hiking and swimming.

Nicaragua has flourished in the past few years and boasts both incredibly friendly people as well as impressive natural beauty. Granada’s colonial charm is complimented by the surrounding active volcanoes and lakes, making day trips a fun and easy option.

Walking is probably the easiest way to see all the sights of Granada, your Chief Experience Officer will give you an initial orientation walk in the city, after which you will have plenty of time to explore in more depth.
See Granada's colourful colonial buildings on an orientation walk. Enjoy a Big Night Out with the group.

For a relaxing afternoon, spend a couple of hours in a boat touring some of the 350+ ¨Isletas¨ or little islands found near Granada in Lake Nicaragua.

Other optional activities include visiting the nearby extinct Mombacho Volcano, now shrouded in vegetation. Granada is located on the shores of Lake Nicaragua and has a long park ideal for strolling. The nearby markets of Masaya house vendors selling great Nicaraguan handicrafts such as hammocks, pottery, and paintings.
Take advantage of a free day to explore Granada or kayak the isletas in Lake Nicaragua.

Enjoy a couple of days of relaxation on a remote northern beach on Nicaragua's Pacific coast. Surfing, swimming and beach lounging await. Our accommodation is in a large, multi-share mixed-gender beach lodge dorm right on the beach with an attached bar and restaurant. There's not much on our stretch of beach, but that's part of the beauty of Nicaragua's northern Pacific coast.

Spend your day enjoying the coast. Opt to explore the city of Leon or hit the beach.

Travel to the 'Route of Flowers' region with its quaint Salvadorian towns and talented artisans.

Day hikes, a coffee tour and shopping are some of many options for your time here. Hike El Impossible National Park, swim in the pools of Atzumpa, check out some of the other nearby quaint towns or just explore tiny Ataco. This is a coffee producing region of El Salvador, so be sure to sample some delicious coffee in a local café.
Full day to explore the small town of Ataco or enjoy optional activities.

The colonial highland town of Copán Ruinas is a charming and relaxing place. Opt to explore the nearby hills on horseback and check out some lesser known Mayan sites along the way, or journey to some local hot springs for a relaxing soak.
Cross into Honduras, and opt to visit the Mayan ruins of Copán or a local hot spring.
Day 16: Copán
Free time in Copan to enjoy optional activities.
Day 17: Copán/Antigua
After a long travel day arrive to Antigua, where you can stretch your legs during an orientation walk with your CEO. Enjoy the beautiful Spanish colonial architecture of this UNESCO World Heritage Site.

Cross into Guatemala. Enjoy an orientation walk to explore the colonial city of Antigua. This tour arrives to Antigua in the early evening. If you are interested in exploring the city and its nearby attractions, it is recommended you book additional post-trip accommodation nights.

Depart at any time. There is much to see and do in this picturesque town. If you have time, opt to extend your trip to explore more of Guatemala.