Stretch your legs on the mainland before setting sail for the Cyclades: this is Greece at its very best. Welcome to Greece – a land of crumbling ruins and crumbling feta, the sun-bleached cradle of modern civilization. A lot of Grecian itineraries begin with Athens’ historical highlights before skipping quickly off to the Greek Islands. But not this one. We’ve designed a comprehensive tour that includes the best of the mainland AND the islands. From the Sanctuary of Apollo at Delphi and the unbelievable monasteries of Meteora, all the way to the olive groves and sandy beaches of the Cyclades. Along the way you’ll discover that Greeks are passionate about a few very specific things: good times, good food, and good gossip. Kalimera! 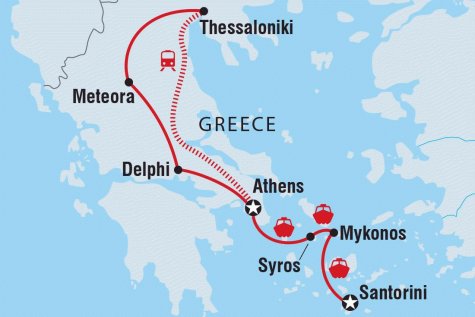