Visit Morocco on an all-encompassing adventure from Casablanca to Marrakech. Travel to Morocco and visit the best of the country's attractions from Casablanca to Marrakech. Travel from the snow-capped Atlas Mountains to the endless sands of the Sahara, and from the medieval old town of Fes to the spice markets of Marrakech, the rich history and natural beauty of Morocco await. Observe the vibrant collision between old and new expressed in architecture and artwork. Learn about fallen cities and cross paths with nomadic tribes. Jump in and discover the many mysteries and legends concealed within this moody, ever-changing landscape. 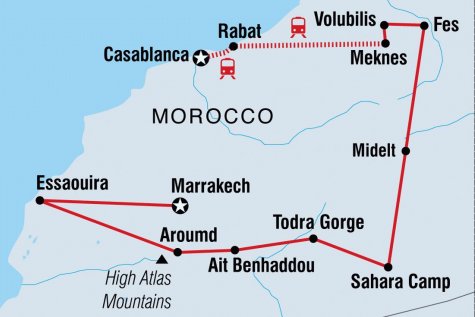