From desert to Dead Sea and all the Holy Land highlights, this journey takes you through breathtaking landscapes and a fascinating human history. Tread some of the most ancient, revered paths known to humankind as you travel through Jordan, Israel and the Palestinian Territories. Begin in Amman, Jordan's capital, and make your way through the desert sands of Wadi Rum to the lost city of Petra. Head into Israel and visit holy sights including the Church of Nativity, the Garden of Gethsemane, the Church of the Annunciation, as well as the Masada fortress. Explore the Ramon Crater, camp out in the Negev Desert and float in the Dead Sea before this trip comes to an end. 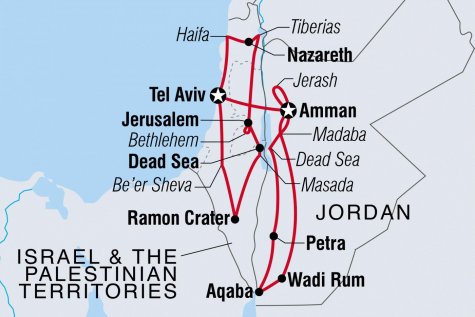