Discover the style, natural beauty and charm of Scandinavia. From beautiful cities that seamlessly blend historic architecture and modern design to sprawling landscapes of pristine natural beauty, Scandinavia has a lot going for it. This 15-day journey through Sweden, Denmark and Norway begins in stylish Copenhagen, where the streets are made for cycling, the boutiques are plentiful and the cuisine is world-class. Discover the neoclassical architecture, leafy boulevards and delicious hagabullen (giant cinnamon buns) of Gothenburg before escaping to the serene beaches and nature reserves of the Gothenburg archipelago. Have your curiosity piqued at Oslo’s eccentric museums and discover endless photo opportunities in Trondheim, one of Norway’s prettiest town. Explore the majestic mountains, deep fjords and untamed beauty of Norway’s north while hiking and kayaking around the Lofoten Islands. Then wrap up the adventure above the Arctic Circle in Tromso, a town famed for its Northern Lights displays. 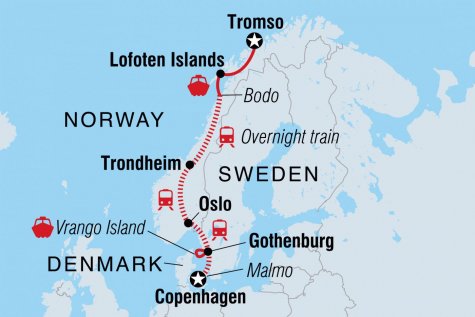