Pedal through beautiful Croatia on an eight-day adventure through rural villages and unspoiled natural scenery. Brimming with vibrant culture and scenic vistas, Croatia is a beautiful country to see from the seat of a bike. With 1,300 miles of coastline and 1,000 islands to explore, cycling through the area’s lush vegetation, olive groves and vineyards is a truly unforgettable experience. Pass through quiet roads, peaceful forests and stunning national parks as we witness the sights and sounds of spectacular Croatia. We cover plenty of ground on our cycling tour, visiting Risnjak and Northern Velebit National Parks, as well as the famed Plitvice Lakes National Park—a UNESCO World Heritage site that combines a spectacular mix of turquoise lakes, cascading falls and travertine pools. After exploring the mountains, valleys and rivers of the mainland, we cycle across Ugljan and Pašman, two islands located off the coast of ancient Zadar with views of the sparkling Adriatic Sea. Our adventure comes to a close cycling through Krka National Park's waterways and exploring the maze-like streets of stone-built Skradin and Trogir. 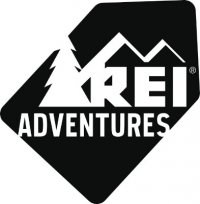 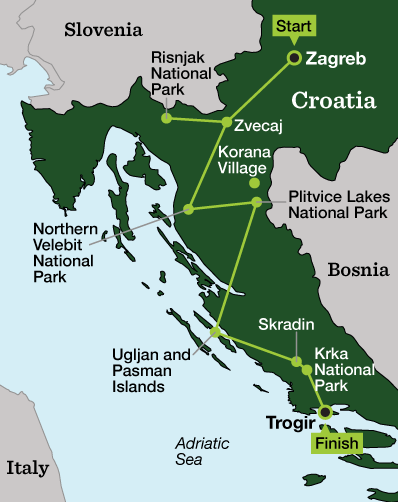 Expand all
Day 1: Arrive in Zagreb, Croatia and meet for an orientation.

Our trip begins today in Zagreb, Croatia. Arrive by 4pm and transfer on your own to our hotel. Zagreb, the capital of Croatia, is a lively and colorful city and is reasonably manageable on foot. Our hotel is well located for exploring the city's main attractions. At 6pm we will meet in the hotel lobby and get to know our guides and fellow travelers over a welcome drink. The guides will provide a brief orientation to discuss the upcoming itinerary. All meals on your own.

Day 2: From Zvečaj , bicycle through rural villages with colorful gardens.
From Zagreb we head south to Zvečaj, a small village on the banks of the Mrežnica River. The Mrežnica River, nearly 40 miles long, is considered one of cleanest rivers in Croatia. Its 93 waterfalls, with pools of clear emerald water between them, entice us to swim. We settle into a small family-owned hotel overlooking the river and waterfalls. Following a bike fitting, we begin our first ride through the villages and forests of the area. In rural Europe, people still live a simple life; old wooden homes with colorful gardens and livestock dot the area. There may be opportunities to taste the forest strawberries, blackberries, raspberries, cherries, or roasted corn and chestnuts—depending on the season. To get back to the hotel we cross a river aboard a small cable ferry, and just as the locals do, we tow ourselves to the opposite shore. We return to the hotel in time to freshen up before dinner. All meals included.
Van transfer: 1 hour; Cycling: 12.5 miles; Terrain: flat to rolling hills.

Meals: B, L, D
Day 3: Explore Risnjak National Park and bike to the source of the Kupa River.
We begin our day by exploring the Risnjak National Park area, located in Gorski Kotar, the most mountainous and heavily forested region of the country. Located just under 10 miles from the Adriatic Sea, the park includes the Risnjak and Snježnik ranges, as well as the source area of the Kupa River which is, beyond doubt, one of the most beautiful places in the area. The Kupa River forms a natural border between Croatia and Slovenia. It springs from a karstic well at the park's lowest point, forming a turquoise pond over 650 feet long and nearly 100 feet wide. This natural phenomenon is one of the deepest and strongest river sources in Croatia, and remains puzzling for scientists. The Kupa flows through a picturesque valley known as the "valley of butterflies" - more than 500 species inhabit the area! We cycle from the hotel and pass through hamlets and forest until we reach the village of Razloge. We continue riding along the river, through the mountains and forests of Risnjak National Park. We cross over the Čabranka River, a tributary of the Kupa, which brings us into Slovenia. Continuing along the Slovenian bank of the Kupa River to Brod, we re-cross the river into Croatia. Time allowing, we'll hike to Zeleni Vir waterfall, the highest in the region, and onwards to the impressive Vrazji Prolaz Canyon (the Devil's Passage) before returning to our hotel for dinner. All meals included.
Van transfers: 2.5 hours; Cycling: 30.5 miles; Terrain: flat to rolling terrain with one longer descent.

Meals: B, L, D
Day 4: Ride from Northern Velebit NP to the Valley of the Gacka River.
The Northern Velebit National Park's mountain chain rises 2,600' above sea level. We briefly explore Krasno village in the heart of the mountains before descending by bike to the Valley of Gacka River, world famous for excellent trout fishing. Our lunch stop is at the river's source, which is surrounded by numerous old wooden mills. From here, we continue cycling through the valley and into the area of Plitvice Lakes National Park. This evening we retire to the tiny village of Korana, located in a picture-postcard riverside setting near Plitvice Park. All meals included.
Van transfer: 1.5 hours; Cycling: 27.5 – 50 miles; Terrain: flat to rolling terrain with one long descent into the Gacka River Valley. The road becomes hillier en route to Plitvice Lakes.

Meals: B, L, D
Day 5: Cycle around Croatia's most famous national park, Plitvice Lakes.
We cycle in and around the UNESCO World Heritage Site of Plitvice Lakes, a sequence of 16 turquoise lakes linked together with cascading falls and travertine pools. The lakes are surrounded by beech and pine forests and are home to extensive wildlife. Our route takes us out of Korana Village, towards the village of Poljanak and the stream Plitvice. This stream ultimately forms the highest waterfall, the 230' Veliki Slap. The area has numerous viewpoints connected by walking paths, providing lovely views of the surrounding landscape and the turquoise blue of the lakes, including the biggest lake, Kozjak, and the highest peak, Medvjedjak, in the distance. The most beautiful part of our ride begins with a descent to Proscansko Lake and following the River Matica to the small village of Plitvicki Ljeskovac. We continue further along a remote road to the Black River source. After a rest and picnic lunch, we cycle through a forest to Jezerce Village. From here it is just a little over 4 miles back to Korana Village. There may be time to enjoy a quick swim before dinner. All meals included.
Cycling: 30 miles; Terrain: rolling to hilly, some packed gravel and dirt roads, and boardwalks.

Meals: B, L, D
Day 6: Bicycle across Ugljan and Pašman Islands with views of the Adriatic.
Leaving the mountains, lakes, and forests behind, we head towards the ancient city of Zadar on the Dalmatian coast. A ferry transports us from Zadar to Preko on Ugljan Island. Populated since the Neolithic period, Ugljan's current settlements date back to the middle ages. The island has Roman ruins, ancient churches and convents, castles, and is covered with rich Mediterranean vegetation, fig trees, olive trees, and vineyards. Cycling along the eastern edge of the island, we ride toward Pašman Island, with views to the deep blue Adriatic Sea. The two islands are connected by a bridge over the narrow Ždrelac straight. Pašman is known to have the cleanest water in the Adriatic due to the changing currents around the island. Time and weather permitting, we take the opportunity to swim in the clear blue waters at one of the local beaches. After cycling to the dock at Tkon, we ferry back to the mainland and drive to the town of Skradin, located near the Krka River. Inhabited by Croatians since the 9th century, Skradin is a romantic Mediterranean town with narrow streets and a charming marina. Breakfast and lunch included; dinner on your own.
Van transfers: ~2 hours; Cycling: 18 miles; Terrain: flat to rolling hills. Note: Fluctuating ferry times may require day to be done in reverse.

Meals: B, L
Day 7: Explore the waterways of Krka National Park by bike.
Krka National Park’s landscape is a wonderland of fantastic karst formations, travertine waterfalls, cliffs, caves, and chasms. In addition to its scenic beauty, the park also contains numerous important cultural and historic landmarks. The ruins of five fortresses dating from the 14th century line the banks of the Krka River, including Kljucica, the largest and best preserved fortress in the park. We spend our last day cycling through the park, exploring its waterways and complex history dating back to late 10th century and the first Croatian kings. In the afternoon we drive to the medieval walled town of Trogir, unique among Dalmatian towns for its abundant Romanesque and Renaissance architecture, which thrived under Venetian rule. After exploring the maze of stone streets in the old town, we share a farewell dinner and celebrate our cycling adventure. All meals included.
Van transfer: 50 minutes; Cycling: 28 miles; Terrain: rolling hills.

Meals: B, L, D
Day 8: Depart Trogir or continue on the Dubrovnik & Dalmatian Islands Cycling Extension.
Following breakfast, transfer on your own from our accommodations in Trogir to the international airport at Split (~3.5 miles). Breakfast included.