Enter ancient worlds on a journey through Jordan and Israel. If you’re looking for travel that will really surprise and inspire you, look no further than Jordan, Israel and the Palestinian Territories. Get amongst the cafe culture in Amman, set up camp under the stars in the Wadi Rum desert, and get blown away by ancient buildings carved into the pink mountains of Petra. Along the way you'll have a leader showing you the ropes and helping you navigate manners and etiquette. For example: in a traditional Bedouin coffee ceremony you’ll actually drink three cups of coffee: one for the soul, one for the sword and one because you’re a guest. Don’t ask for a fourth – it’s greedy and you might wet your pants on the bus. 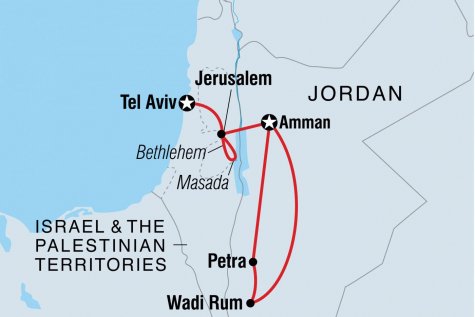 On arrival to your hostel there will be a welcome note waiting for you.  Meet your leader at the hostel at 4.30 pm .After your meeting finishes head out on an orientation walk up to the very cool Machane Yehuda Market. Here you can sample tasty local eats using your bite card at any of the vendors. Your leader will leave you here so you can kick-on after dark. We recommend grabbing a beer in one of the many laneway bars and watch the market come to life in the evening, bar hop, or go for a wander to check out the amazing graffiti popping up on shop shutters.
Meals: B, D
Day 8: Jerusalem
This morning drive to Jaffa Gate where you will start a walking tour of the Old City from above and below! Start with the Ramparts Walk from Jaffa Gate all the way to Herod’s Gate. This will take about 45 minutes. Go down at Herod’s Gate and walk along the Via Dolorosa (Stations of the Cross), stopping at the Austrian Hospice for a short break and go up to the rooftop for a view of the Old City, before continuing to the Church of the Holy Sepulchre. Walk to the Wailing (Western) Wall stopping at the 'Cardo' in the recently restored Jewish Quarter. The rest of the afternoon is free.
Meals: B
Day 9: Jerusalem
Rise and shine nice and early to drive out to the spectacular cliff-top fortress of Masada, near the Dead Sea. Kick off the day with an early morning hike up the Masada Snake Path which winds its way up approximately 400 meters from the lowest point on earth (The Dead Sea) to the Peak. This UNESCO site is super important to the Jewish people, a symbol of their exile from the Holy Land and of bravery and self-sacrifice. The story goes that here a Jewish sect called the zealots held out against the Roman army in AD66. Rather than surrender, they either fought to the death or committed suicide, every last man, woman and child. It's kind of like Gallipoli for the state of Israel. Catch the Cable Car back down then drive to the Dead Sea for a float in the salty waters.The story goes that Cleopatra used products from the area as part of her beauty regime, which also allegedly included asses' milk and almond extract! Return to your hostel in Jerusalem.
Meals: B
Day 10: Tel Aviv
This morning check out of your hostel and head to the Mount of Olives for a panoramic view of the Old City.
From there, drive to Bethlehem – no doubt you're familiar with it from all the Christmas carols and nativity plays. Drop by the Church of the Nativity (on top of the cave where Mary popped out Jesus) and the Shepherds’ Fields (where the angels appeared and told them to get their gold, frankincense and myrrh out).
On a walking tour with your leader, check out this slow-paced town in the West Bank, one of the world’s longest continually inhabited cities, and just try and wrap you head the fact that people have lived here for 11,000 years. Here Graffiti has filled the walls by many artists over the years, including British Artist; Banksy. Learn the personal stories behind some of the more prominent pieces. The walk will also take you past one of the largest refugee camps in the West Bank and previous conflict hotspots. Continue on to Tel Aviv. Check out the ancient port city of Jaffa, the basis of modern Tel Aviv. Your guide will then check you in at your hostel before bidding you farewell. Perhaps check out what else the cosmopolitan city has to offer on an optional 3-hour orientation bike tour. If that's not your cup of tea then we recommend a stroll to the Sarona Market. One of Israel's largest indoor culinary offerings, Sarona Market features premium imported goods, alongside the best local fare. Tel Aviv is known for its nightlife, so maybe get amongst it tonight.
Meals: B
Day 11: Tel Aviv
Your adventure in Israel will come to an end today after breakfast.