Travel from Marrakech to Barcelona and discover the highlights of Morocco and Spain. Travel through Morocco and Spain. From the splendidly chaotic medina of Marrakech, through the ancient city of Seville, to the artistic streets of Barcelona, come and explore the great Moorish metropolises of Morocco and Spain. Step back in time as you wander down medieval alleyways and through crumbling Roman ruins. From spectacular sunsets to exotic spice-filled souqs - with a good dose of tapas and flamenco in between - discover age-old cultures and bright, new beginnings on this exotic adventure. 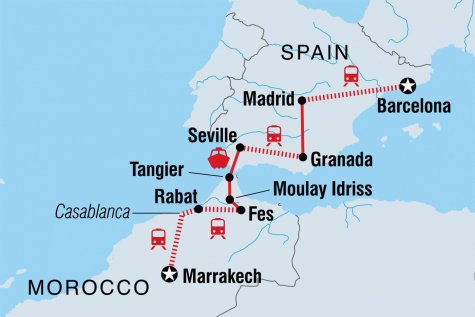