Discover the beauty of Scandinavia and the Baltic States on this northern loop ending in Germany. Explore the highlights of Scandinavia (Denmark, Norway, Sweden and Finland), before travelling back south into the Baltic states, with a few choice stops at Riga and Klaipeda, as well as Aukstaitijia and Curonian Spit National Parks. Estonia, Latvia and Lithuania are a few of the continent’s last true undiscovered secrets: the fairytale turrets and cobbled lanes of old Tallinn, the baroque flair of Vilnius and a fascinating (and poignant) history of Soviet occupation. This really is a one-of-a-kind itinerary. If there’s a beaten path through Europe, it sure isn’t here. 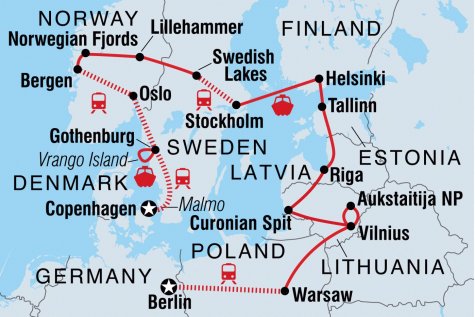