Eat your way from Ljubljana to Skopje via Motovun, Plitvice National Park, Zadar, Split, Korcula, with stops in Montenegro and Macedonia. If it’s a gourmet feast you want, a gourmet feast you shall get! This food-inspired escapade through Slovenia, Croatia, Kosovo, Albania, Montenegro and Macedonia includes visits to salt pans, a truffle farm, wineries, fishing villages and more. Discover why Istria is considered one of the world's leading producers of quality olive oil; eat mouth-watering, slow-cooked meat cooked Dalmatian-style under a metal bell; and raise a glass of refosk (Slovenian wine) or slivovitz (plum brandy) and shout ‘zivjeli!’ to the simple, home-style cuisine this region is famous for. 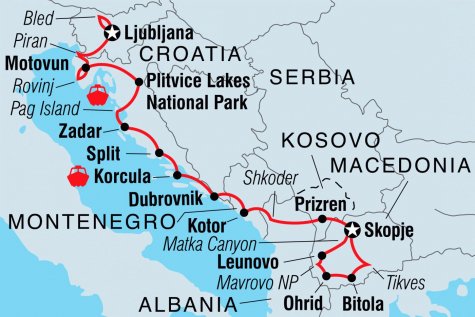