Explore Croatia, Montenegro and Macedonia foodie hubs from Dubrovnik to Skopje. No one leaves this real food adventure hungry! Immerse yourself in the culinary delights of the Balkans on a twelve-day tour through Croatia, Montenegro and Macedonia. Picnic on the lush banks of the Treska River, stroll through national parks and soak up picturesque scenes of waterfalls, church-filled villages and some of Macedonia’s most spiritual sites. Sip a traditional fermented drink – boza – for breakfast (don’t knock it ‘til you try it!), master the art of the perfect pastry with the village women of Janche, enjoy A traditional barbeque in Kosovo, dine on a home-grown meal in the private garden of a Dihovo family and visit a centuries-old olive press outside of Kotor. Experience next level hospitality on this unforgettable foodie adventure. 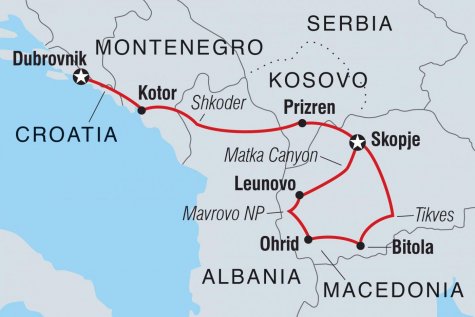