Discover a surprising side to Turkey with this secrets-filled adventure from Trabzon to Van. Switzerland-esque valleys and mountainscapes, Sri Lankan-style tea-covered hills, crumbling churches on the desolate grassy landscape of high steppe – these are the unexpected sides of Turkey. Changing hands between Greeks, Hellenes and Byzantines over centuries, eastern Turkey is a treasure trove of architectural and cultural wonders that’s somehow slipped under the radar for years. Retrace the path of the historic Silk Road from Istanbul and explore the lesser-known areas surrounding the Black Sea to the ‘pearl of the east’ Van. Head to the spectacular Kackar Mountains, visit Turkey’s renowned dairy country in Kar, and travel to the very edge of Armenia to marvel at rugged Mount Ararat. Wild, vast and gloriously lonely – this is a side of Turkey few get to see. 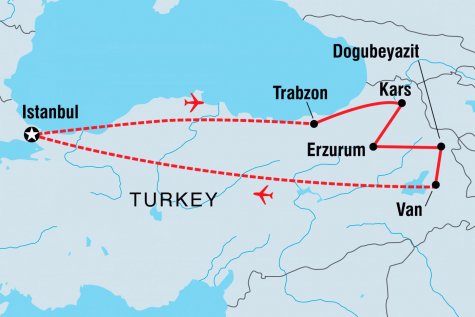