Set off on an epic journey that combines the best of southern Africa, from its vibrant cities and iconic landscapes to its multitudes of legendary wildlife. Begin this 30-day adventure in South Africa, experiencing Cape Town’s colourful culture, then continue to Kruger National Park to spot a dazzling array of creatures like the "big five." Experience Namibia’s vast desert landscapes and the thunderous roar of Victoria Falls before exploring Zimbabwe and Botswana, which boast some of the richest wildlife reserves in the Africa. 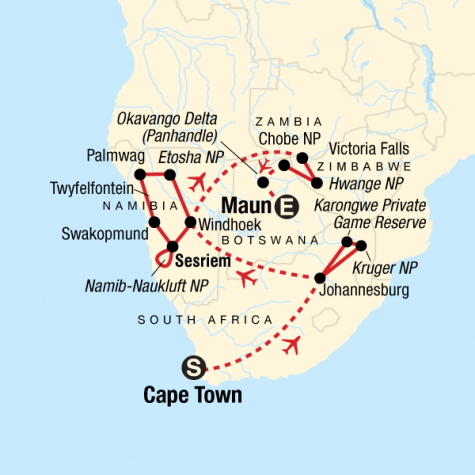 Expand all
Day 1: Cape Town
Arrive at any time. Arrival transfer included.
Day 2: Cape Town
Visit Kirstenbosch National Botanical Garden with an expert guide on a tour exclusively designed for our groups — the garden has been named one of the top gardens in the world by National Geographic Traveler magazine. Continue on to explore vibrant Cape Town and Cape Point, with a visit to the penguins at Boulders Beach.
Meals: B
Day 3: Cape Town
There is something for everyone in Cape Town. Visit Table Mountain, walk the V&A Waterfront or embark on a wine tour in and around Stellenbosch. For the adventurous, opt to go skydiving, abseiling, or, if you're really brave, cage diving for a close encounter with a great white shark. Wander through the city centre, which has some of the oldest buildings and gardens in South Africa. Check out the Cultural Historical Museum, Planetarium, and many other museums and theatres.
Enjoy a day of leisure and choose from a variety of optional activities including a visit to Table Mountain or a Stellenbosch wine tour. If you are interested in visiting Robben Island - you must book it directly with the museum on their website prior to travel: http://www.robben-island.org.za Due to high demand, it is common that this tour can be sold out over one month in advance.
Meals: B
Day 4: Cape Town/Johannesburg
Fly to Johannesburg. Enjoy a traditional South Africa Braai (barbecue) for dinner with your local CEO and fellow travellers. Due to fluctuating flight times with the local carrier, there may either be some additional free time in Cape Town in the morning, or the opportunity to do a brief tour of Soweto when you arrive in Johannesburg. Your CEO will give you your flight times and full breakdown of what is possible, at your arrival meeting. Enjoy a traditional South African "braai" (barbecue) welcome dinner.
Meals: B, D
Day 5: Johannesburg/Greater Kruger Area
Enjoy a full day scenic drive along the famed Panorama Route with stops at Blyde River Canyon, Bourke's Luck Potholes, and God's Window. Continue to our tented camp located near the Kruger National Park and this evening enjoy a delicious South African dinner in the boma. Today is a very long driving day; however, we will make many stops along the way at sites along the Panorama Route.
Meals: B, D
Day 6: Kruger National Park
At over 19,000 sq km (7,500 sq mi), South Africa’s Kruger National Park is one of the largest and most impressive animal reserves in the world. With 147 species, Kruger has more species of large mammals than any other park on the continent.
Enjoy a morning wildlife safari drive through Kruger National Park in an open vehicle. Take in views of the abundant wildlife including elephants, lions, and giraffe. In the afternoon, opt to extend your safari drive or head back to the lodge where you can take a short nature walk or relax on the deck with views of the surrounding area.
Meals: B, D
Day 7: Greater Kruger Area/Karongwe Private Game Reserve
For the next two days, enjoy ranger-led morning and evening wildlife safari drives in an open safari vehicle in Karongwe Nature Reserve. Search for buffaloes, elephants, leopards, lions, and rhinos – Africa's famed Big Five. With over 9,000 hectares (22,240 acres) of supreme African bushveld, Karongwe Private Game Reserve is home to many creatures, and our safari drives provide several opportunities for wildlife viewing.

We use various accommodations within the reserve (the location is based on availability). During your time here, you will either stay in lodge rooms or very comfortable permanent tents (both of equal quality and with similar amenities).
Continue on to a private nature reserve in the Greater Kruger area. This afternoon, meet with a researcher from the Endangered Wildlife Trust’s Cheetah Metapopulation Project who will share information about their efforts to protect cheetahs and other carnivores. This National Geographic-sponsored project is part of the Big Cats Initiative. After, the researcher will join us on our evening wildlife safari drive. Wildlife safari drives are conducted with qualified wildlife rangers and Shangaan trackers who will share their vast experience of the African bush.

The town of Victoria Falls is a great base to see both natural wonders and take part in some exciting activities. Get up close (and wet from the spray) while awing at the immense Victoria Falls, raft the whitewater of the mighty Zambezi, and for the more adventurous, bungee jump with Victoria Falls in view.

Today, new travellers may join you for the rest of your adventure. You are welcome to join them at a group meeting this evening, followed by an optional dinner.
Spend the day exploring your beautiful surroundings. Opt to visit Victoria Falls, go whitewater rafting, or take a helicopter flight over the falls. Want to do more with your tour? Pre-book any two of the following activities: Zambezi Whitewater Rafting, Victoria Falls Helicopter Ride, or the Zambezi River Sunset Cruise.

Any optional activities listed on this day can also be booked upon arrival in Victoria Falls.

Meals: B
Day 22: Victoria Falls/Hwange National Park
Examine the life and struggles faced by the Painted Dog (wild dog) population in and around Hwange national park and the efforts made by the conservancy to prevent poaching and the damage done by snare traps that have endangered the Painted Dog population in Zimbabwe. The ultimate goal of the project is to release rehabilitated animals back into the wild and to work with local children and communities in an effort to educate and shift behaviors away from poaching.
Enjoy free time in the morning and opt to visit the falls. Later, visit the Painted Dog (Wild Dog) conservancy and meet with a conservationist to learn about the work being done to rehabilitate injured animals as a result of poaching. After, travel to Hwange, Zimbabwe's largest national park, and enjoy a safari drive on the lodge concession in search of wildlife. This evening, arrive at the lodge, located just outside the park entrance, and enjoy dinner. Road conditions in the region can range from good to very poor. As such, we slow our traveling speed in the rough spots and enjoy some sand and bumps – all part of the adventure of traveling in Africa.

Please note that hot water shortages, low water pressure and power outages can occur in Southern Africa. We appreciate your patience and understanding that these occurrences are outside of our control. Wifi is available in most places (extra charge may apply), but in remote areas there can be service interruptions. A/C is not generally available in the accommodations we use, really it isn't needed as evenings tend to cool down. Floor or ceiling fans are usually available.
Meals: B, D
Day 23: Hwange National Park

Take a full day wildlife safari drive in the park which is home to large elephant herds, lions and the rare African wild dog. This evening, relax on the sun deck with a cool drink, keeping an eye out for local wildlife who visit the lodge's watering hole.

Keep an eye out for Chobe bushbuck and puku antelope, which are found only in this part of Botswana. The Chobe River is home to the world’s largest elephant herds; buffalo, hippos, and lions can also be seen here.
Depart Hwange and head north, crossing the border into Botswana, and arriving in Kasane, gateway to stunning Chobe National Park. This afternoon, enjoy a boat safari on the Chobe River in search of bathing elephants, hippos and crocodiles.
Meals: B, D
Day 25: Chobe NP
Opt into the photo wildlife safari on the Chobe River at sunset; you’ll be accompanied by an expert wildlife photographer and guide who will help you get the perfect shot.
In the morning, continue our wildlife viewing with a safari drive along the banks of the Chobe River. In the afternoon, opt to take a photography river safari on a specialized photography boat.
Meals: B, D
Day 26: Kasane/Okavango Delta
Catch a flight into the “Panhandle” area of the Okavango Delta and check into the remote camp in the wilderness. Enjoy lunch before taking a walk to the research camps of the National Geographic funded Okavango Wilderness Project. Meet with someone from the research team and learn about their work and projects in the area. Planes used to fly into the Delta are small and weight restrictions are mandatory. For this reason luggage restrictions are 15kg per person for checked in luggage and 5kg for Hand luggage for a maximum of 20kg per person. As well, the airline requires the weight of each passenger, your CEO will collect this information from you privately, at the beginning of the trip.

Tonight we enjoy a unique and adventurous stay in a remote bush camp (known locally as a fly camp). Accommodation will be in simple dome tents on cots, and facilities are wash basins and out house/long drop toilette (simple but clean) which are shared amongst our group. There is no electricity and lighting in the evenings is by lantern, so please bring a flashlight. While basic, this is a once in a lifetime opportunity to immerse yourself into the wilds of Africa. Our local guides and staff add some comfortable touches, excellent food and spin some fantastic campfire stories.
Explore the stunning Delta Panhandle with expert local guides to enjoy wildlife viewing from mokoros, African dugout canoes, and on bush walks; also visit a fish monitoring station and a local village. This evening, we will enjoy a unique stay in a bush camp on one of the remote Islands within the Delta. Here we enjoy a 3 course meal around a roaring camp fire, sitting back and listening to the night calls of the Delta wildlife.

Depart from our island camp and continue wildlife viewing on foot and by mokoro with our expert local guides. Return to the main camp later this afternoon and opt to relax or have a swim. This evening enjoy the deck overlooking the lagoon with hidden seating areas and a fire pit, perfect for stargazing.

Transfer to the frontier town of Maun and enjoy an evening of culture and traditional foods with celebrated author Bonty Botumile and the Thari-E-Ntsho Storytellers. This local enterprise is dedicated to preserving Botswana’s heritage and providing youth with employment opportunities in the arts. Option to take a scenic flight over the delta.

Depart at any time.