Journey from the Nile River to the Rose City of Petra, discover the relics of the Holy Lands and be awed by ancient civilizations and breathtaking landscapes on this epic adventure through the Middle East. Uncover Egypt, Jordan, Israel & Palestine. Take a journey across lands that conjure up images of ancient civilizations, holy relics, cities carved from stone and sunrises over desert landscapes. Sip aromatic coffee in Cairo before you discover the pharaonic temples and tombs along the river Nile, take jeep safaris in Wadi Rum and the Negev desert and gaze up at unpolluted skies full of stars. Discover the Rose City of Petra, and the Roman city of Jerash before arriving in a city of a different kind modern cosmopolitan Tel Aviv. Taste what is arguably the best falafel in the middle east in Manger Square, and take a walking tour through the holy city of Jerusalem. Immerse yourself in this exploration across the best of the Middle East and gain a deeper understanding of this enduring land and its people. 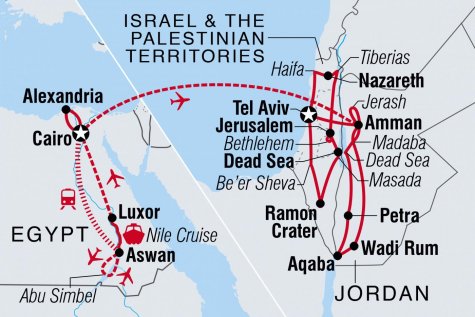 Return from Abu Simbel and transfer to meet your Nile cruise boat. Enjoy a fantastic mix of total relaxation and organised sightseeing on an iconic Nile River cruise to Luxor.
Notes: Nile cruise boats are typically very large with a passenger capacity of around 150. All cabins have private facilities and the boat is fully air-conditioned. Evenings will be spent on the boat, so make full use of the boat's facilities where you can relax on the top deck by the pool and watch stunning Nile scenery pass by. All meals are included on board. Although we use the best possible five-star rated cruise boats available, please note that the local equivalent of five stars isn't to the same standard that we might expect at home. Nile cruise boats are not luxury, but they are very comfortable and a great way to experience the Nile. Due to varying schedules we aren't able to provide advance notice of which exact boat we'll be sailing on.
Meals: B, L, D
Day 7: Nile Cruise
Continue your leisurely cruise down the Nile, with today’s stop Kom Ombo Temple, north of Aswan. Built on a high dune overlooking the Nile, the complex sits picturesquely ruined on the river's edge and dates back to the early 2nd century BC. The complex is unique because it has a mirror-image design, divided down the middle, with either side dedicated to a different set of Gods. One half is known as the Temple of Sobek (the crocodile-headed god of fertility), and it includes details on the Ancient Egyptian's relationship with crocodiles, whom they revered and feared in equal measure. The other half is dedicated to Haroeris (also known as Horus the falcon god), and the whole temple is full of fascinating reliefs.
Return to the cruise boat where you’ll continue travelling upriver, with free time relaxing on the sundeck and taking in the surrounding sights – desert hills forming a backdrop to lush riverbanks, fishermen casting their nets and farmers working their land.
Meals: B, L, D
Day 8: Nile Cruise
Today finds you moored near Edfu, a beautifully preserved temple also dedicated to Horus, the falcon-headed god. You will disembark and discover the lively streets of Edfu town – get acquainted the bustling town centre and the bazaar.
Visiting the Temple of Edfu is included in your itinerary however you may want to read our notes below before you decide.  Back on board continue towards Luxor passing through the Esna Locks.   It is not uncommon to have to queue to proceed through the locks, a great opportunity to check out the process from deck with a cool drink in hand, and listen to the shouts of the many captains as they navigate there way through the various small boats of merchants selling their wares to a captive audience - Life on the Nile.
Settle back and and make the most of the incredible views across one of the world’s greatest rivers and your last night onboard.
Meals: B, L, D
Day 9: Luxor
Your Nile cruise comes to an end in the open air museum of Luxor – from the spectacular temple complex of Karnak to the Valley of the Kings, Luxor is full of wonderfully preserved reminders of the Pharaohs.
Today you’ll visit the Intrepid Foundation's local project ACE (Animal Care in Egypt). It’s a great chance to see the holistic approach the project takes towards animal welfare, and to raising awareness among the locals.
You’ll also explore the magnificent Karnak Temple, which is perhaps the most impressive of all the ancient Pharoahs' monumental works. One of the world's most celebrated temple complexes, Karnak is a house of the gods built over a period of some 200 years. Your guided tour of this vast temple of impressive pylons, obelisks and chapels will reveal its finest sections, such as the Avenue of Sphinxes and the Great Temple of Amun.